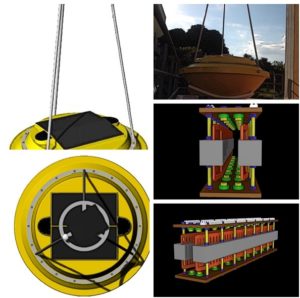 Wave energy is a type of well-concentrated and predictable renewable energy, and its resources are huge (IEA’s estimation of the total wave energy is up to 80,000 TWh a year[1], compared to the worldwide electricity production 17,400 TWh in the year of 2004). Extracting wave energy from seas may significantly contribute to the green target of sustainable development around the world.
Although difficulties, wave energy conversions have been seen some successful stories. It is reported a few hundred navigational buoys (oscillating water columns) have been deployed in the remote and harsh areas where the access for frequently changing batteries is not viable. Also, the breakthroughs in wave energy conversion in 1970e1980s on some prototype devices once convinced people that massive wave energy production would soon become a reality. Considerable works have been undertaken on wave energy assessment in several areas of the European coastline. The total wave power was found to range from 1GW in Sweden, to 120 GW in UK, passing through 3.4 GW of Denmark, 10 GW in Portugal, 21 GW in Ireland and over 28 GW in the area of Gulf of Gascoigne, France. Recent works focused on the Spanish coastline reveal an enormous potential in several coastal areas facing the Atlantic, with a wave power which frequently reaches 200 MWh/m and exceeds 400 MWh/m along the Death Coast.
In this report we describe the numerous steps that allow the design and fulfilment of wave energy converters.

The optimum plan of wave energy system should follow a specific pattern:

Weather buoys are devices designed to collect weather and ocean data within the world’s oceans. Drifting buoys have been used since 1979 while moored buoys have been in used since 1951, Moored buoys are connected with the ocean bottom using either chains, nylon, or buoyant polypropylene.
There are numerous applications for buoy data, which complement data
collected through other means such as satellites:

The main sensor is represented by a tab SMD assembling on board a triaxial accelerometer, a triaxial gyroscope and a compass triaxial; connection to the microcomputer is bidirectional I2C. The resolution of the sensors of the modul to 9 axes is as follows:
• Compass 12-bit
• Accelerometer 13-bit
• Gyroscope 16-bit
For a total of 41 bits each of the axes (X, Y, Z) will therefore have 123 bits for each sample (16 8-bit byte). Using the maximum possible speed sampling is possible to have an acquisition every 0.1 sec.
In the following Fig. 1-1 we can see the dimension of the DEIM weather buoy” 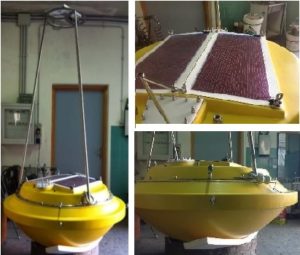 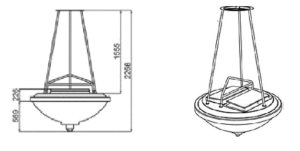 In this section we describe a permanent magnet generator that is the “heart” of wave energy converter. We studied different topologies of electrical devices that could be optimum solution for its aim, anyway after numerous FEM simulation, through an economic comparison we decided to realize a PMG.

Below we will be described the principle parts of the machine.

The PMG is defined as bilateral generator and we find two stators. The material used is iron and it is made by overlapping of 126 sheets, having a thickness of 0.5 mm, in order to minimize the eddy currents. The geometric dimensions of each single stator are: 60×972×65 [mm]. it consists of 39 slots and 8 holes with a diameter of 10.5 mm, according to the figure 5.5.

Figure 2.1 Plan of Stator of PMG 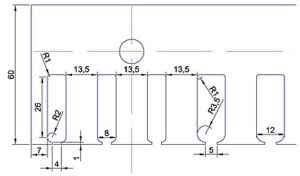 Figure 2.2 Slots and teeth of Stator

In the end, we find two tables of bakelite, used for assembling the stator block. In size 970x160x11mm. There are 32 holes to 10 mm, arranged according to the diagram shown in figure 5.7.

The translator is made up of an alternating assembly of 40 Neodymium– Iron–Boron (Nd–Fe–B) permanent magnets, interspersed with soft iron pole pieces mounted on a bakelites sheet as shown in Fig. 2.4. The magnets are stacked in pairs such that opposing magnetomotive forces (mmfs) drive the flux through the soft iron. Thus, the dimension of each magnet is 60 ×30×15 [mm] and it has a protective coating of nickel. Its weight is 205.2 g.The sheet of bakelite is 1600×11×206 mm and it has 40 hallows to install each magnet.

Figure 2.4 Schemes of shifter of PMG 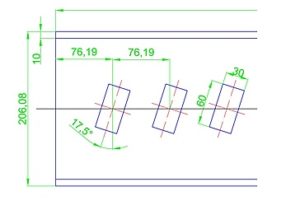 The material of coils is copper and in particular is enamelled copper wire of diameter 0.5 mm. The coils have 375 turns of rectangular shape with an average size of 85×135 mm. Each coil has a weight of 278 g.
We identify 72 coils that are arranged in 36 in each side of the armature (coils A and coils B). 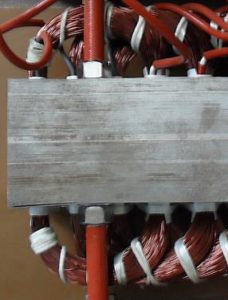 As for the electrical device, we introduce below plan, real figure and summary tables of the PM generator. 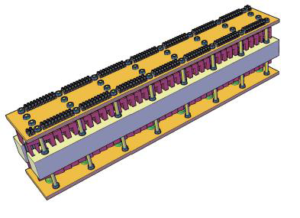 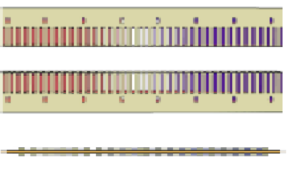 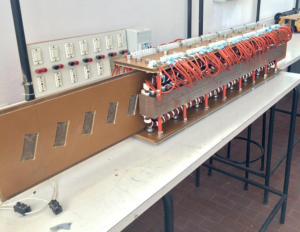 Figure 2.11 Photo of Assembly of Stator and Shifter 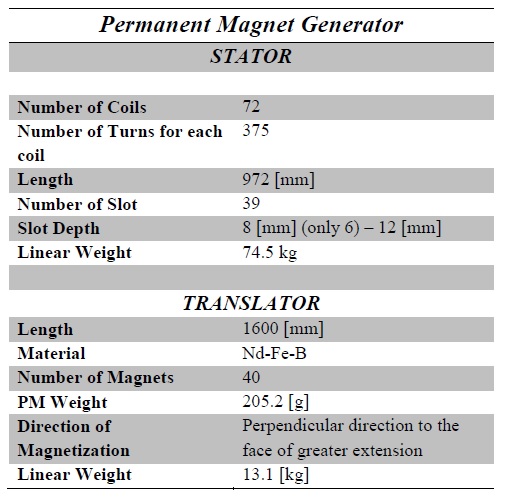 The description of buoy-generator is the final step of the process of design of wave energy converter.
A lot of research has been carried out on the hydrodynamic behaviour of buoy based on the oscillation principle (first category) in an array. The hydrodynamic problem of wave power absorption is usually studied as a combination of two simpler problems: the diffraction problem (scattered incident wave field due to the presence of the WEC) and the radiation problem (wave field generated by the body).
The study of the generator buoy system was carried out by considering all the forces on the oscillating structure including the hydrodynamic forces. In simplified form, we consider two hypothesis:

a) The single degree of freedom motion of the buoy;
b) Simplified model of regular waves.

In this work the choice of the excellent buoy is based on the comparison among two different layout: a vertical buoyant structure and a buoyant device with ellipse shape. In particular, it’s possible underline that two floating structure could be used to exploit energy from sites with different sea conditions. 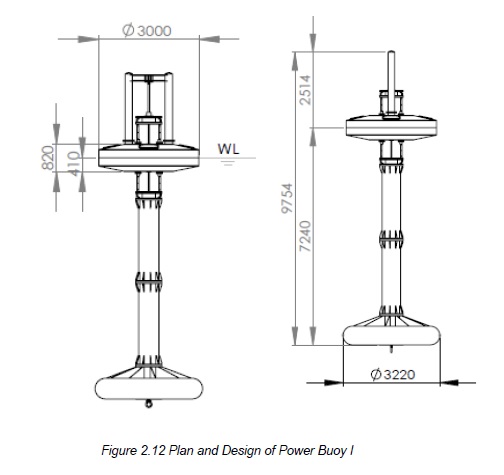 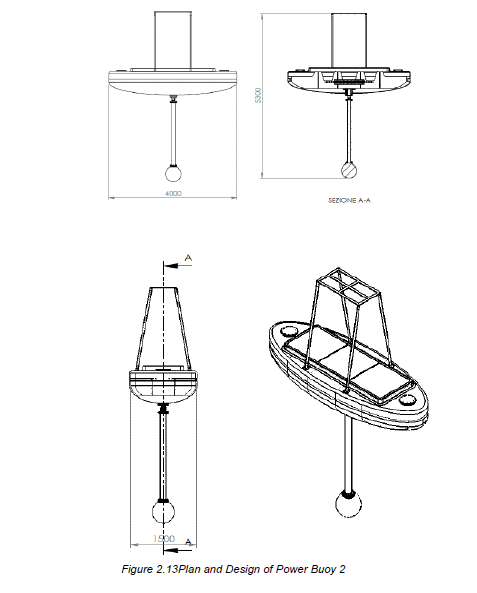 Considering the Power Buoy 2, the largest buoy can extract more energy at study location and the use of the submerged body allows the increase of the energy production; in addition the structure represents an innovative choice if we consider state of the art of buoyant WECs. The figure 2.14 shows definitive design of it. 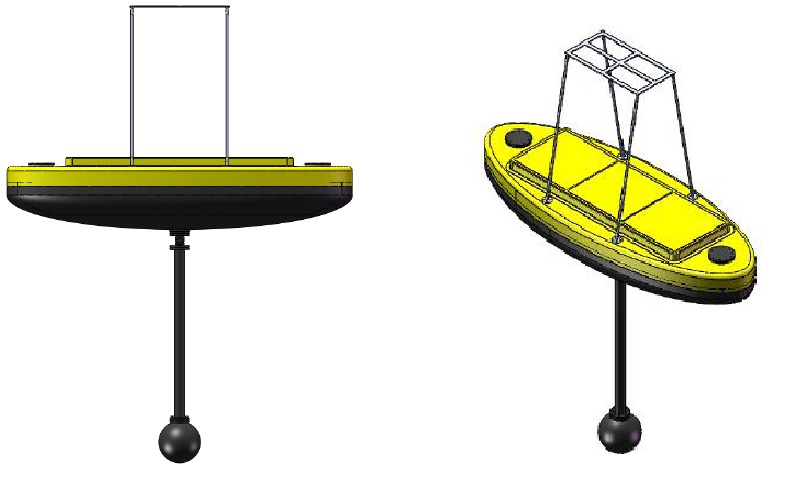 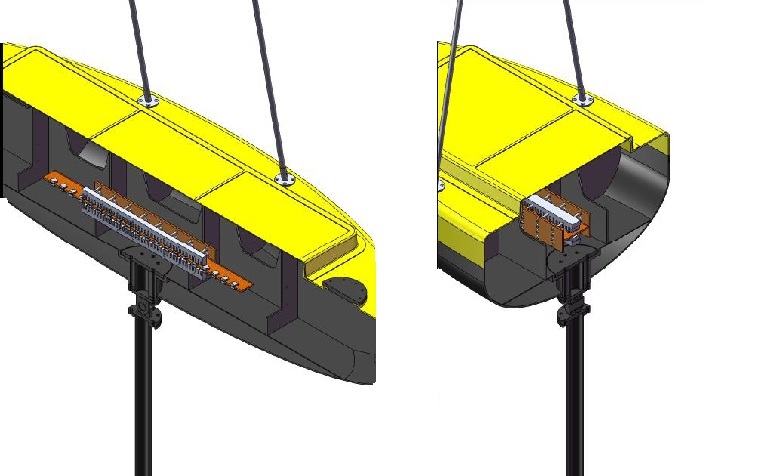 So in conclusion, It’ possible to underline some of the main aspects of Power Buoy:
1 low environmental and visual impact;
2 possible integration in port facilities, in offshore installation and / or marine installations as fish farming;
3 integration with other renewable sources (wind or photovoltaic system).
So wave energy could become a valid energy alternative for islands that could convert the sea a source of prosperity.